I’m not a huge fan of applying lotion, but I do really love to put on body oil. I’m not sure why there’s such a huge span in my enjoyment levels since the products have similar purposes and results. They both moisturize, for the most part.

Maybe it’s because body oil just seems to go on easier? Maybe a smaller amount just goes further? Maybe it’s because oil doesn’t need much added to it to work so it’s a more natural choice than a lot of lotions? Maybe it’s just that the result moisturizes my skin type just a little bit better. (I do tend to get pretty dry.) Whatever it is, I love body oils! Here are some of my current favorites of very reasonably prices options.

I just picked up this bad boy body oil today. (Side note: Trader Joe’s is pretty good at positioning these add-on products right where I’ll buy them. This happened to be on a shelf right next to the eggs. So now I own it.)

In addition to lemongrass and coconut oil, this also contains jojoba oil. The pump is not the greatest thing I’ve ever experienced, but it’s oil so I would assume it’s not ever all that easy to pump it out. I applied this right after I got out of the shower and now I feel softly moisturized and smell like lemongrass, which I’m not mad about. While I can feel the oil on my skin, I don’t feel over-greased at all. Even on my hands. Still able to use my phone without greasing up the screen, so we’re good.

As far as I know, Neutrogena has been selling this sesame body oil for like 700 years. (Don’t quote me on that, because I might be exaggerating.) My mom used it (or something like it) when I was growing up and it’s been available at Costco for as long as I can remember. Has to be decent, right? I like it. 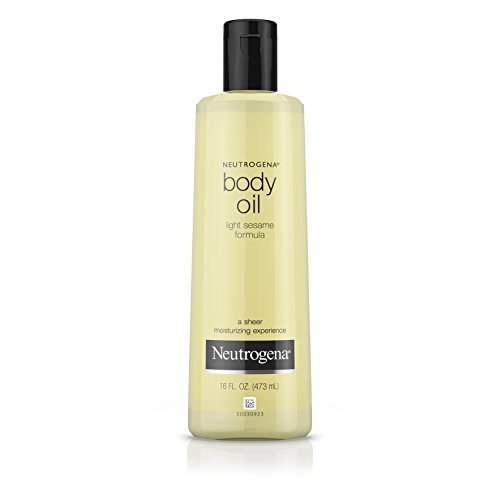 In this case, there’s no pump to act up, which is cool. That also means that you have to pour it out the top and 100% guarantees that it will get the bottle all oily. I’d suggest keeping it in the shower and never allowing it to leave. They do say you’re supposed to moisturize the skin while it’s still damp, so here’s a great way to stay in that habit if you aren’t already.

While this oil can make a total mess of the plastic bottle it comes in, it does not make a mess on the skin. It sinks it pretty nicely and lasts well.

I love cocoa butter oil. Those hearty fatty acids just really moisturize the skin. This particular brand adds vitamin E oil to it, which is great for healing the skin as well. It’s cheap, smells good, and lasts a long time. It kind of makes you smell like a cookie or something, which I can appreciate. I mean most body oils sort of make me feel like a baked good or something, but in a nice way. Again, I’d personally recommend applying this in the shower and just letting it all soak in before getting dressed or touching your hair. It dries fast, but not instantaneously.

Related: The Rose Quartz Roller Ball We Never Knew We Were Missing

4 Skincare Devices that Give You Real Results at Home

Why Aloe Vera Gel Belongs in your Beauty Arsenal