“Rap is a big part of my music, of course, but also dancehall and a touch of Latin-American music. I keep experimenting with my sound. “HAZMAT,” which was written and recorded by Yla Howe and me, was actually made at my house. We went to my studio and completely freestyled. It was the first song that Yla and I did, where we literally loaded up a beat we found on YouTube and just punched in lines.

No writing was involved at all – we just went verse for verse and tweaked it at the end. I think it’s pretty interesting to make a song without writing anything down, straight from the top of your head. The song is basically like a bouncy vibe, and it’s just about living life.

My part is living kind of a low-stress life, and Yla’s part is about him running around trying to do everything right and climb up in the industry and everything. Overall, “HAZMAT” gives off a really energetic, fierce vibe, and we think the track’s going to do very well.”

The 19-year-old is better known to some as musician and songwriter Christian Caceres.

“It was around 2016 when all these rappers with hilarious names emerged – like Lil Yachty, Lil Peep, or Yung Gravy. I was looking for a catchy moniker that audiences would never forget, so I picked Lil Noodle. You could consider the name a little tongue-in-cheek, I guess …” 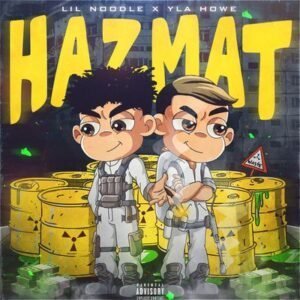