Lo-fi alt/pop band Weston Estate has released their latest single “Saturday Nights” through Arista Records. The sound includes a hip-hop beat amongst a sonic landscape with some adolescent puppy love shaping up the lyrics.

“This song is based on an idea that we held onto for a year. We wanted the song to embody the growing pains of adolescence at a time when everyone else seems to have everything figured out. We recorded the original demo in a bedroom, but it really came to life during our first real studio session. That’s why we’re so excited to finally put this song out; it feels like it has grown and evolved alongside us as a band.” 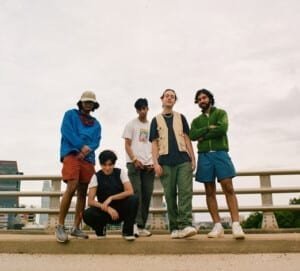 Weston Estate is named in jest after an affluent neighborhood that’s near their hometown of Cary, North Carolina. The band came to be in 2017, making a notable 2018 debut when they performed at an event in their hometown.

“We were playing sad songs and there was a mosh pit. We somehow got a mosh pit out of high-schoolers at a charity event,” remembers Srikar Nanduri (guitar.) Other band members are Manas Panchavati (vocals), Tanmay Joshi (vocals), Abhi Manhass (production, bass), and Marco Luka (vocals.)

Their experimental sound is inspired by artists like Daniel Caesar, Young Thug, and Frank Ocean, but also taps into influences from their own respective cultures. All are of the band members are of Indian descent besides Marco, who is a first-generation Cuban-American.

The latest single follows “Close the Door,” an upbeat yet bittersweet heartbreak song. Undoubtedly their experimental sound will continue surprising with each track.

“We are rather smart boys…intelligent lads. Our band philosophy is optimistic nihilism. Straight-edged middle-aged women getting lit to our music is our aesthetic.”

Related: Olivia Lunney Talks Her Debut Album ‘To the Ones I Loved’